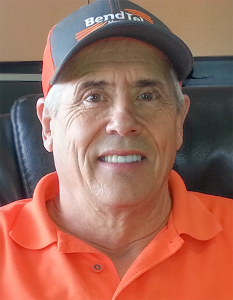 BendTel celebrated the 10-year milestone of its CTO and co-owner James Neff this month. Neff is a 4th generation Oregonian whose pioneer great-grandfather was one of Bend’s earliest settlers, after whom Bend’s Neff Road was named. A former COCC wrestling Bobcat, James attended college on a wrestling scholarship before volunteering for the Army, where he became a sergeant in the 58th Signal Battalion. His Army occupational specialty of Telephone Lineman opened the door to a career now spanning more than 4 decades. Due to the communications-oriented nature of his occupational specialty, the Army also required James & his squad to complete SERE training (Survival, Evasion, Resistance and Escape).

This training also seems to have served James well in his career. From the breakup of Ma Bell, to the advent of several succeeding generations of new technology, to rapid industry consolidation, the amount of change & upheaval in the telecom industry over the past 40 years could well be described as cataclysmic. Perhaps James’ unfailingly positive outlook and adaptability are owed in part to the perspective he gained in the Army. He recalls one training exercise which required him and his squad to subsist for a week in the wilderness. After foraging several days, he managed to spear one small fish in a muddy pool with a sharpened stick. But while roasting the fish over an open fire, he succumbed to exhaustion, falling asleep and dropping the fish in the flames, where it was burned to a crisp. Escaping the ensuing ire of his famished but irate colleagues was, he relates, a truly stressful event. So when his very first employer, AT&T’s Western Electric Division, was dismantled by the AT&T divestiture early in James’ career, he saw not a calamity, but an opportunity to form his own company, NeffCom.

In the early days of NeffCom, the effect of the AT&T divestiture was felt as an explosion of technological innovation. Equipment manufacturers rapidly developed new products to fill the demands of businesses that now began purchasing telephone systems of their own after decades of relying on rented equipment from AT&T. NeffCom’s growth was rapid as prevailing standards in telephone equipment technology changed several times in the course of several years, from analog, to electronic, to digital. By 1999, the year James sold NeffCom to Unicom to become Vice President of their Interconnect Division, IP telephony had already begun emerging as the next dominant technology. Also, the telecom industry started re-consolidating. In 2007, the year James left Unicom to buy into BendTel, Unicom had already been acquired twice – first by Echelon, then by Integra.

Meanwhile, at BendTel, James has taken pride over the past 10 years in working with his partner and CEO Tom Barrett to build an enterprise with longevity. Asked for a quote on the occasion of his 10-year BendTel milestone, James said, “I feel better about myself and what I create when I can see joy & forward motion in other people. Employees are like family.” Aside from the satisfaction of providing a great workplace, James says his work is exciting because it continually affords the opportunity to learn something new, all to better serve the customer. Outside of his career, James notes some of his greatest joys in life have been raising a large family with his wife Valorie and living on his family’s Central Oregon farm. He is also an avid off-road motorcycle racing enthusiast and competes in regional motocross events.